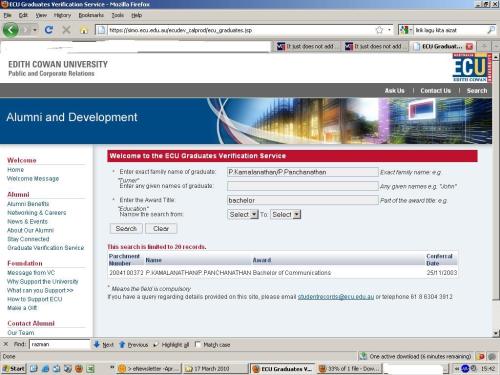 • Government Relations/International Relations.
To foster relationship between my organisation and governments.
This includes assisting in the development of product information policy, management of legislative activities and communication and coordination with other public entities at the federal, state, regional and local levels. It also covers representing my organization in other part of the world/countries in carrying out lobbying activities with state and federal legislators.

In line with the organizations mission, building and maintaining relationships and monitoring issues related to the country is a key part of my responsibilities.
My experience with the Malaysian Palm Oil Promotion Council has given me the expertise to handle such situations.
Event Management.

To organize events and activities which is relevant for the organization.

Preparing annual budget for events, recommend events that would enhance the image of the organization.

Would be in consultation with exhibit managers, convention representatives and others concerning physical set-up needs and requirements for assigned areas, which will also include visiting the sites and venues.

Managing Crisis Communication.
I have the ability to assess the situation from inside and outside the organisation as all stakeholders might perceive it and at the same time would be able to identify the techniques needed to solve or prevent crisis before it blows out of the context.
I am also able to undertake pressure and working within the regulatory and ethical requirements; which includes the initiating corporate social responsibility programmes.
I would be able to create a better management system whereby we would be able to decrease or eradicate number of serious accidents or any incident that could become serious and detrimental to the organisation.
I am indeed proud to share that I have the ability and confidance to increase better staff awareness of their roles and responsibilities and would be able to inform them the need and requirements from the organisation.
Academic Qualification:
• Accredited Public Relations Practitioner [APR].
• Bachelors of Mass Communications – Public Relations Edith Cowan University, Australia
• Diploma in Public Relations Institute of Public Relations Malaysia (IPRM)
• Diploma in Language Transalation (Communications) Dewan Bahasa dan Pustaka, Malaysia
• Certificate in Public Relations London Chambers & Commerce Industry, England

Other Information
• Organising Chairman of the National Pongal Festival. This festival has been organized since 2003. The last event was
organised at Menara Kuala Lumpur on January 15
2008 and was attended by YB Dato’ Seri S Samy Vellu – President of MIC and the Minister of Works. The Pongal Festival is also listed in the Malaysia Book of Records and has won the crystal award (merit) for the best Multi Racial event in organised in Malaysia, this award was presented by the Institute of Public Relations Malaysia (IPRM).
• Organising Chairman of the ‘Road Safety Campaign in conjunction with the General Elections 2004’.
• RTM 1 (Bahasa Malaysia) and RTM 2 (English) panelist in their various talk shows. Mainly would speak in Unity, National
Integration and the Political Stability in Malaysia. The last show which I appeared was on the 24
th
March 2008 over RTM 1 – live talk show on the General Elections 2008.
• Presented papers on Public Relations in New Delhi and Chennai in India.
• Participated in a Leadership Training in Gummersbach, Germany in 2007. The training was organized for 14
(fourteen) days and was attended by 32 participants. I was the sole representative from Malaysia.
• Just finished producing a documentary title ‘THE TRUTH’ for RTM. This documentary would show case the success and the
achievement of the Malaysian Indians in this country. Besides producing the documentary, I also did the script and voiceovers for the entire documentary in Bahasa Malaysia.